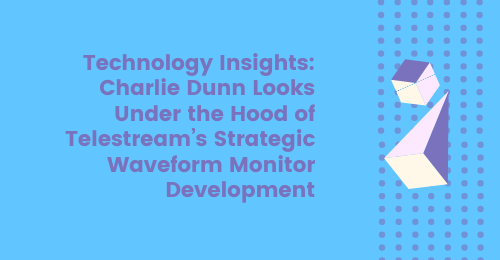 June sees Telestream announce major new functionality and software-based feature sets for its PRISM waveform monitor. The company has developed its market-leading PRISM Waveform Monitor into a single next-generation solution that is equally well suited to SDI and IP workflow applications. With this major new version, PRISM can be optioned for all the traditional SDI waveform monitoring tools required in operations, compliance, quality control, and post-production workflows up to 8K resolution. Simultaneously, the same product offers a comprehensive suite of IP-based Waveform Monitoring tools up to 4K resolution on 25G Ethernet. PRISM includes enhanced High Dynamic Range (HDR) and Wide Color Gamut (WCG) reports and tools to increase efficiency in both SDI and IP environments.

Telestream sees the release of this major new version as a strategic milepost in the evolution of the PRISM Waveform Monitor. In this interview with Charlie Dunn, Senior Vice President of the Tek Video Business Unit at Telestream, we look at the drivers for this strategic development initiative.

How would you describe PRISM’s evolution – initial launch, to today, and the future?

Initially, we launched Prism to support early adopters of SDI over IP technologies and deployments. We found people mostly using wire-shark, an off-line tool, and wanted to give people a real-time view they were accustomed to in SDI. Although we knew that the transition would be difficult, we wanted to be part of the first systems and among the group of leading-edge suppliers who were implementing and learning. All along we knew that we would need to provide both IP and SDI connectivity because it became clear early on that SDI would need to exist for a long time. The approach we had to take was one where we could evolve as the market evolved … which meant that most of the capability would need to be defined by software. Although more expensive and time-consuming to develop, we felt strongly that given the uncertainty about how things would unfold this was the best way to support our customers. Early on we sold a few units to POCs and manufacturers, but this last year the IP portion of our portfolio outsold the SDI portion and continues to grow.

How big a challenge was it to develop PRISM’s capabilities to be equivalent in SDI and IP environments?

If you go back 20 years, there was SD-SDI in PAL and NTSC and that was it in terms of the formats. Later this evolved into HD-SDI and we had to contend with progressive and interlaced and film-style frame rates Then you move to 4K and you introduce dual-link, quad-link, and single link formats in quadrature and interleave. Now, you take all this and you map it into the different flavors of IP: ASPEN, NDI, ST2022-6, and ST2110-20/30/40 and so on. Any one format and any one standard is straightforward, but the overall complexity is enormous. One over-riding theme, as we mentioned above was that even though customers were transitioning to IP, all of the jobs they were doing in SDI would remain the same: establishing timing, confirming ancillary data, decoding Dolby audio, measuring guardbands, looking at gamut violations, etc. Consequently, at every step, we need to build capability that enables these jobs to be performed in both IP and SDI for all of the formats. Again, an expensive and time-consuming job but one we were convinced needed to be done. There would be no IP-only installations, nor would everyone move to IP unilaterally. We had to support both.

How does this SDI / IP capability position PRISM in the market?

At Telestream, we built our system from the ground up to be both IP and SDI. When you buy PRISM there is no additional charge or option card for IP or SDI –it’s part of the base configuration. What we felt was the wrong way to go, long term, was to simply build an IP converter on the front end of a traditional waveform monitor. While there’s an easy transition from ST2022-6 (which is an IP encapsulation of SDI) we knew that long term these two formats would diverge and we needed to be dealing natively with each of them. We didn’t want to figure out how to convert 32 separate audio flows (a real case) and try to be jamming this through an SDI-based system that couldn’t deal with that many audio tracks. It has been a big investment, but one we now look at and feel this sets us up well for the future. In this regard, I think PRISM is unique.

Will COVID have an impact on SDI to IP migration? Will it accelerate “remote production” types of applications?

There was already a consolidation among our customers leading to building more cost-effective facilities that could utilize the equipment in a more efficient way that was simply not possible with the scale you could achieve with SDI. There was already a large migration, based on cost-savings, to move to more and more “at-home” or “remote” production for live events where. Also, there has been a push to put editing and post-production in a cloud environment. I think it’s too early to know how the new perspective that Covid and working from home will impact these transitions, but at the very least there will continue to be cost pressure as the industry changes and I believe IP will play a central role in that even though today it’s seen as an expensive undertaking.

Was the UI/API remote access capability developed with “remote work” in mind, or just happened to support it?

The previous generations of the waveform monitors were what you would call an “embedded system”- mostly hardware-based and purpose-built. Remote access was an afterthought and a little bit clunky. The approach we took with PRISM was to develop it using standard technology (Linux on X86) where remote access would be a fundamental part of the design. Today we support VNC access which is great for engineering teams who may not be physically near the equipment they need to support. Also, we went with a touch design to provide flexibility for the unknown. Because of this, the remote interface is exactly what you see when you are in front of the machine. There is no need to find room for a button panel in the post suite because they can drive it with touch or a keyboard and mouse. These seem like small things, but they are critical to the use case of how people want to assemble their systems.

Do we have any handle on how important remote working capabilities are becoming now and in the future?

Ultimately, people want to flexibly access the capability they have. They don’t want to leave post suites idle in one location and be over capacity in another. They don’t want to have a master control suite used for 3 hours on 16 Sunday’s a year. This all plays into being able to centralize the assets (physically and virtually) and gain access to them over a fast network. Part of this equation is providing user controls that are exactly the same as sitting in front of the machine. That’s our goal and there are many technologies out there that can support this, it’s just a matter of us tapping into that.

What drove the development of the short depth/ dual-screen capabilities – is this a big/growing trend – a competitive differentiator?

Two reasons, really. We found customers buying two waveform monitors and mounting them side by side measuring the same signal. This was typically in a sports environment where they were measuring waveform and vector in a camera shading position. We pitched the idea to one of them and they loved it. Because we took an open system standards approach, this really fell out of the architecture we used and it was relatively easy to extend your desktop to a second screen much like you do when you plug a screen into your laptop. The second reason was that we found many 3RU monitors were mounted with either a blank panel or small drawer next to it, a video monitor above it, and a speaker box below it. We thought we could consolidate both the picture and speaker into one system and simplify how it works, especially in an IP system where it’s a little more complicated to distribute the signals via the control network.

How big a challenge is the miniaturization of a platform as sophisticated as PRISM?

It’s reasonably straightforward. As we said earlier, it’s an X86 Linux system at its core and there are many examples of these systems being shrunk down to the size of a USB-stick. Our focus right now is to build out the functionality of the system in terms of what we measure. There’s ATMOS, there’s ST2110 with compressed streams, there’s 8K, etc. There’s no shortage of new jobs to do, but it’s a fair bet to say we will be riding the curves of this technology as we progress.

And finally, where will these new features and facilities take PRISM along its product pathway?

I think putting compressed streams over 2110 will accelerate the move to IP because it cuts the bandwidth by four to eight times without introducing much delay (a few lines). This reduces the costs of a distributed system and enables things like 1080p, 4K and 8K to live in the same system relatively easily. I think ATMOS will also be another technology that more and more of our live customers will adopt. This plus HDR defines a new viewing experience that will become essential for premium sporting content.

*This article was originally published on The Broadcast Bridge and can be found here. *