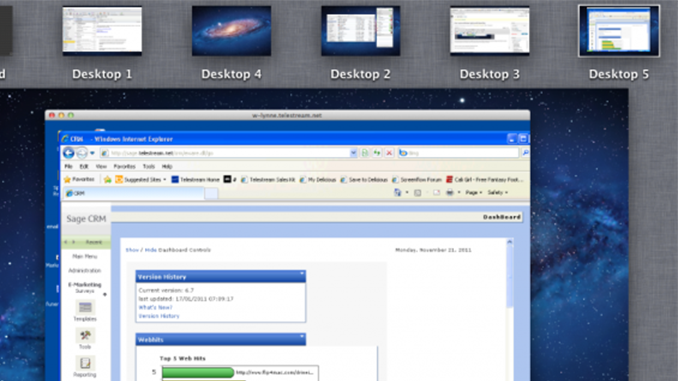 One of the things I do here at Telestream is send out our email marketing. We use a program called Communigator. Although Communigator is a web-based interface, it ONLY works when accessing it through Internet Explorer.

So, when I decided to ScreenFlow some internal training videos about how to use Communigator, I realized I was stuck! I had to find a way to access IE on my Mac.

Microsoft stopped developing IE for Mac back in 2003 at version 5 (they are currently on version 9), so, I basically had 2 choices:

If you need to run a lot of programs in Windows, or if you don’t have access to a Windows machine, Parallels might be the best option, though it’s not free ($79.99). Parallels essentially allows you to run Windows applications on your Mac. Download and launch the software, and you can then launch Windows applications directly from your Mac dock. Here’s a picture of my desktop with IE running through Parallels.

One nice feature is the ability to run applications natively in a Windows environment. If you use this setup though, you need to have keys to run those Windows applications.

If you have access to a Windows machine, then Remote Desktop Connection (RDC) may be the simpler solution — and it’s free. Remote Desktop Connection is a technology that allows you to connect to a remote computer in a different location. It’s handy for connecting to your work computer from your home computer, for example. But one of the benefits is being able to connect to Macs from PCs and vice versa.

As you can see from the screenshot above, with RDC, I’m not just running a Windows program; I’m actually controlling a whole Windows machine- from within the Mac interface. One of the drawbacks is the screensize seems to be reduced (at least on my computer). But it takes less memory to run this than Parallels, which may require partitioning your hard drive, and installing Windows software.

I downloaded the free version of RDC here and followed the easy instructions to allow remote connections to my Windows machine.

There are various other solutions and  programs you could look at, including GoToMyPC, (monthly cost) which also allow you to connect to a remote computer. GoToMyPC offers more features than RDC such as admin features and higher security.

For me, the Remote Desktop Connection worked perfectly for my situation. I was able to open up IE directly in my Mac, launch ScreenFlow, and record a whole tutorial of my mail application running in IE. This is a great alternative to having to screen record on a Windows machine, and then bring in a separate file into ScreenFlow!